numbers…. ok: by this afternoon, at least 1,395 Palestinians were killed and at least 7,680 were wounded in gaza since july 8.  these numbers have now risen, as airstrikes and shelling continue this morning. at least 68 families have now lost several members in the same attack according to un ocha’s latest report. 56 occupation soldiers were killed at least, in addition to a bedouin citizen from the negev, a thai worker and a jewish israeli civilian. yesterday, the occupation government called in an additional 16,000 reserve soldiers. meanwhile, the US supplied them with more weapons: “The United States has allowed Israel, waging an offensive in the Gaza Strip, to tap a local US arms stockpile in the past week to resupply it with grenades and mortar rounds, Rear Admiral John Kirby, the Pentagon’s press secretary, has said.”

since gaza’s sole power plant was bombed tuesday, gaza is now mostly without electricity. almost no electricity means almost no water, almost no communication (both between families and friends to and with us. my friend maha had three hours of electricity yesterday. tonight, again, i will be relieved if i hear from her, no matter with what horrors. until then, i wait). no refrigeration or freezing of food items where food stocks and access are already critical. medical equipment not functioning, hospitals unable to perform. it’s a humanitarian catastrophe in a whole new dimension.

yesterday, 130 people in gaza are said to have been killed. among the attacks yesterday – as reported in yesterday’s report – the UN school in jabaliya refugee camp was shelled. at least 15 people (some numbers are higher) and reportedly over 90 were injured, many with severe injuries, missing limbs. the school was sheltering 3,300 internally displaced people at the time. more than 219,657 people are currently sheltered in 86 unrwa schools, while an additional 220,000 are thought to be sheltered in other public institutions and with families and friends. this is at least the sixth unrwa school to have been shelled in the past three weeks, and 136 schools in total were  “affected by shelling” (ocha). 8 unrwa workers were killed so far. today, the unrwa general commissioner said that diseases are now spreading in the shelters.

yesterday, chris gunnes, the unrwa spokesperson who is usually trying too hard to sound “balanced” (and thereby normalizing/excusing war crimes and other horrendous acts), tweeted this:

“This is the 6th time 1 of our schools has been struck in #Gaza fighting. Our staff are being killed. Our shelters are overflowing”

“We believe there were at least three impacts. It is too early to give a confirmed official death toll”

“Last night, children were killed as they slept next to their parents on the floor of a classroom in a UN designated shelter in #Gaza”

when interviewed by aljazeera, chris gunnes then broke down crying in front of the camera. – about time. enough with this “professional”, distanced discourse on gaza.

These incidents have only added to the growing chorus condemning Israeli war crimes – for example, Amnesty International yesterday stated that “artillery should never be used against targets in crowded civilian areas”. Citing the UNHRC inquiry, Amnesty urged accountability for those responsible for war crimes. By Tuesday, Israeli strikes had damaged 133 schools & 23 health facilities; destroyed or damaged 8,590 housing units. The UN OCHA’s latest briefing includes the following: “To 29 July, at least 68 families have lost three or more family members in the same incident, for a total of 360 fatalities; 140 men, 73 women and 147 children.” Meanwhile, the Israeli military death toll reached 56 soldiers and officers (in addition to three civilian fatalities).

one of the injured after unrwa school shelling

during the “humanitarian ceasefire” – the army excluded all areas of fighting, whatever that was supposed to mean – the market in sheja’iya, the city east of gaza city that was completely flattened last week, was bombed or shelled. a video suggests that the area was attacked again AFTER ambulances and journalists had already rushed to the scene. 17 people were killed and an estimated 200 injured. here is a graphic video on fb. you can also read about it or watch the video on ei. also this report on aljazeera includes a video.

journalist rami raydan was among those killed during his work.

journalist rami raydan killed while covering the boming of sheja’iya market. the area was shelled or bombed again AFTER ambulances and press had arrived

yesterday, the zionist army asked residents of almost the entire buffer zone, which according to an earlier report by UN ocha, currently comprises 44% of the entire gaza strip! according to the occupation army’s own statements, they warned residents yesterday not to return (this is provided that they did in fact manage to or decide to evacuate in the first place) as they would basically attack anyone they see in these areas. also yesterday, they apparently dropped flyers over gaza city, warning residents to evacuate. evacuate to WHERE? as residents, journalists and human rights groups repeatedly stress, THERE IS NOWHERE LEFT TO GO. this is a cynical and crude attempt to absolve themselves of responsability in front of outsiders and to their own population “we’ve warned them, it’s not our fault if they are still there”. it’s like telling a woman “i’m going to rape you now if you don’t suddenly disappear into thin air”, then raping her, then telling everyone 1) “i warned her, she stayed” (if we want to take this further, it’s also saying 2) i raped her for her own good. you should see how shitty her husband/boyfriend/girlfriend/family/friends/co-citizens abuse her, they are evil, i am the only one who tries to care for her. 3) they use her to threaten me.) 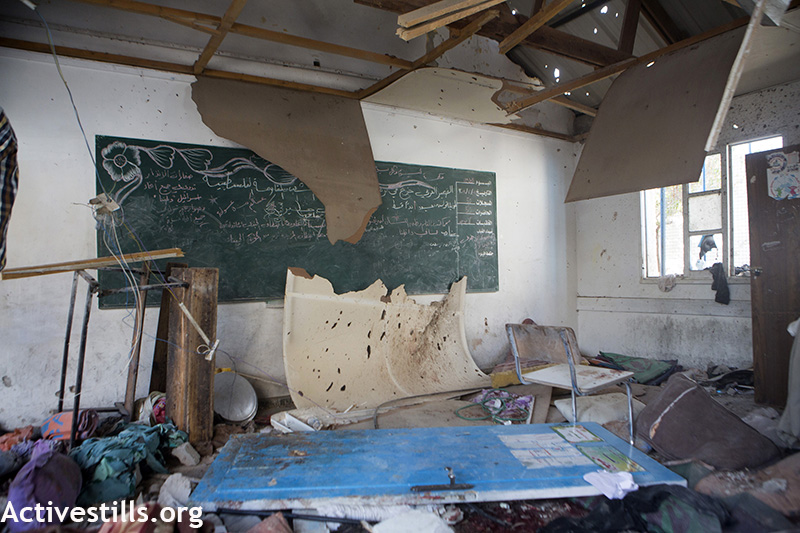 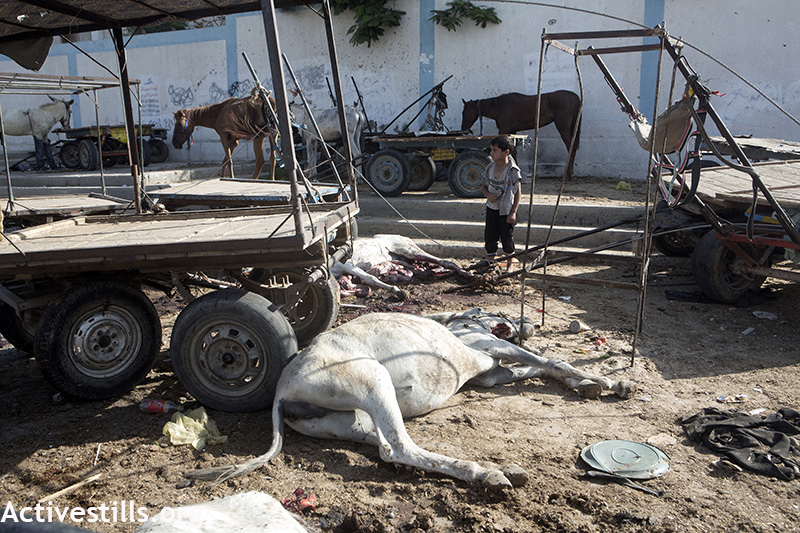 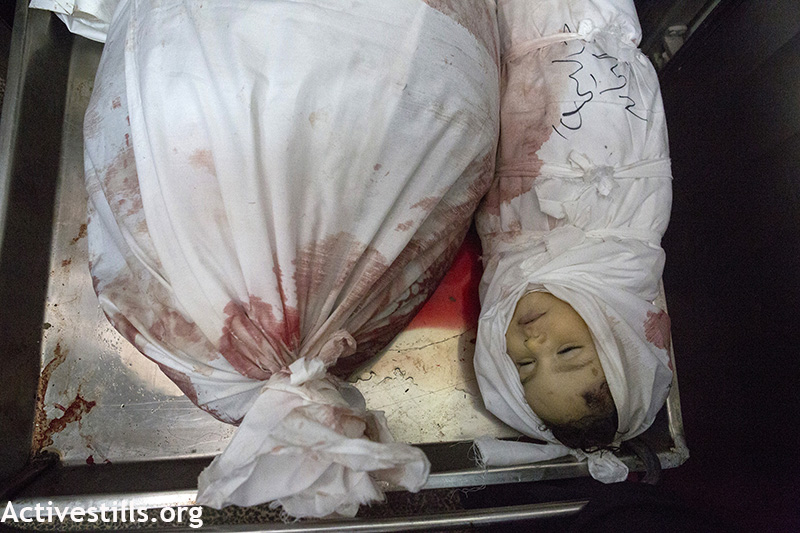 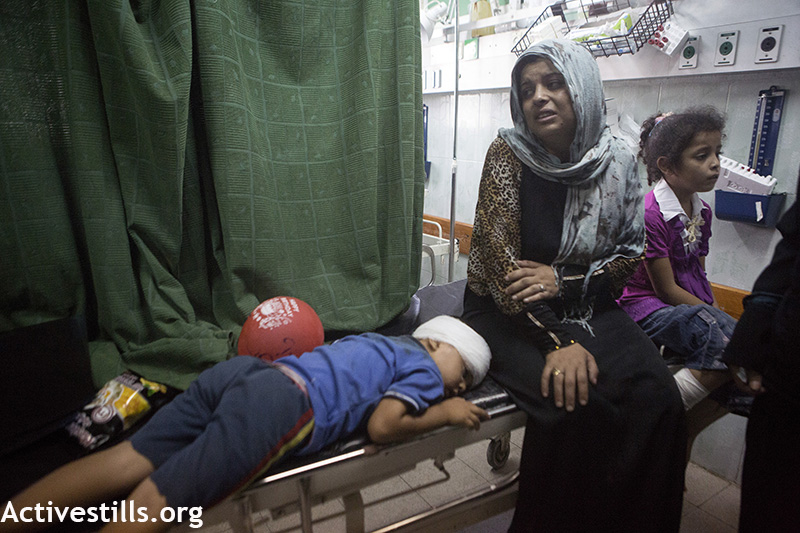 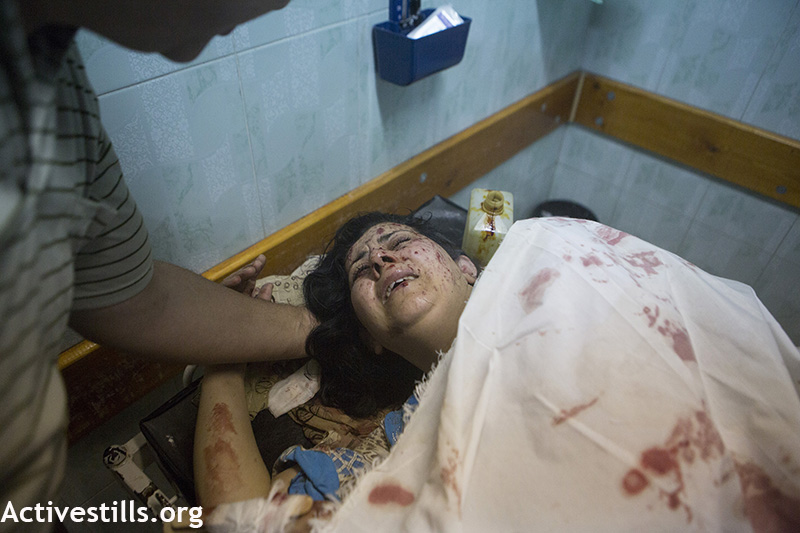 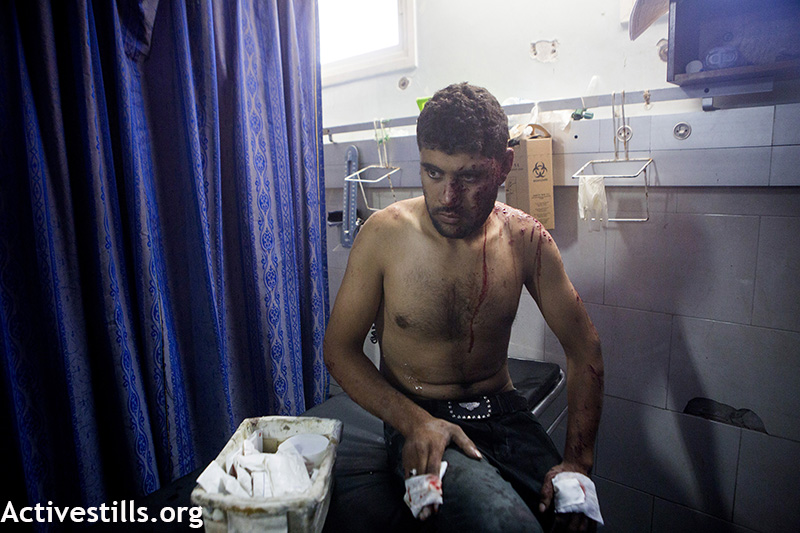 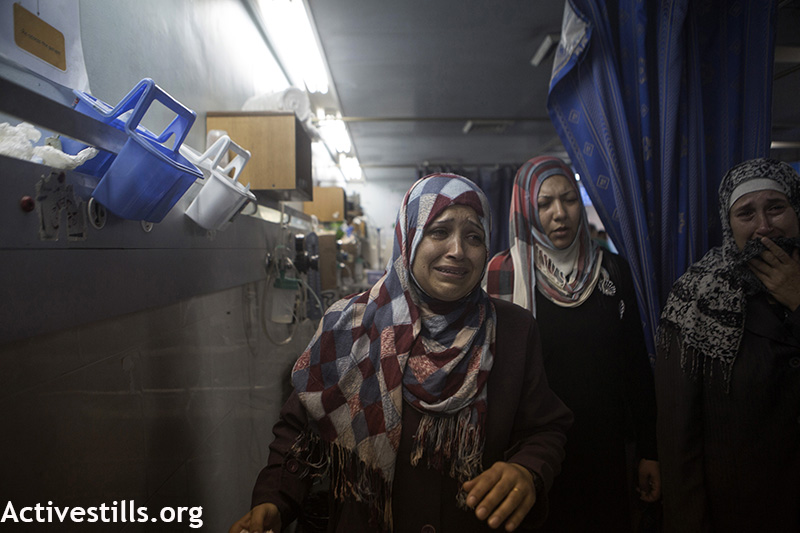 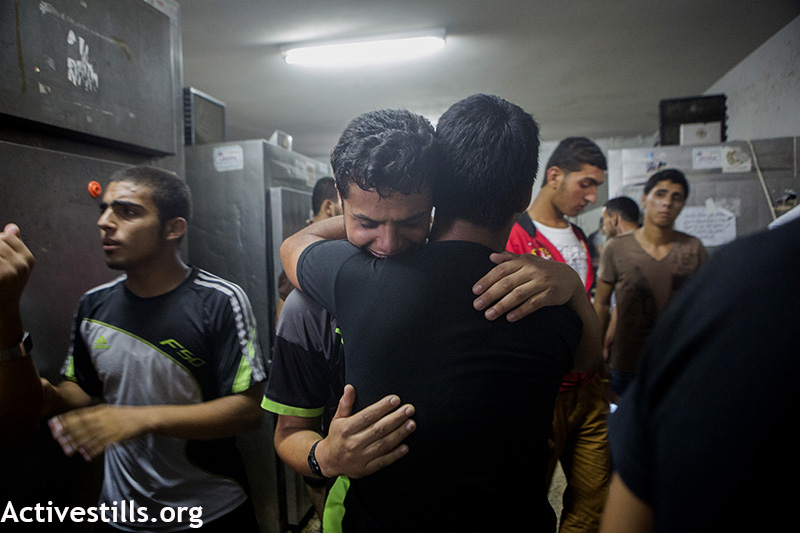 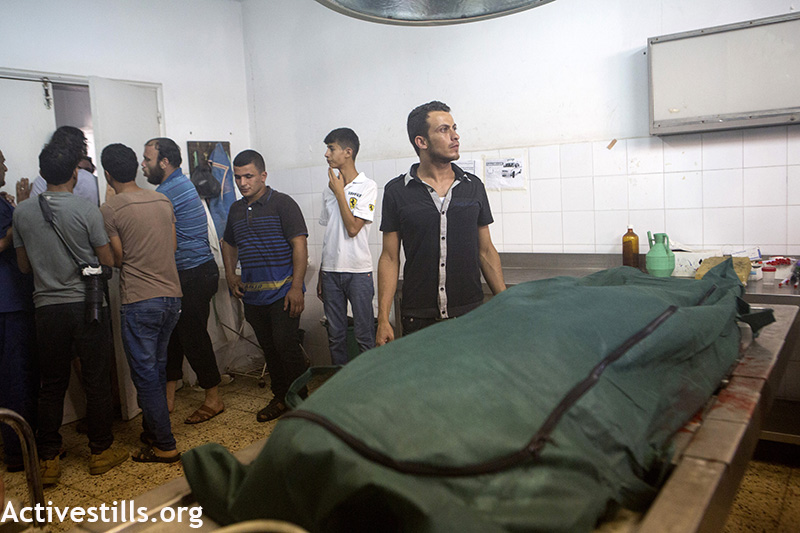 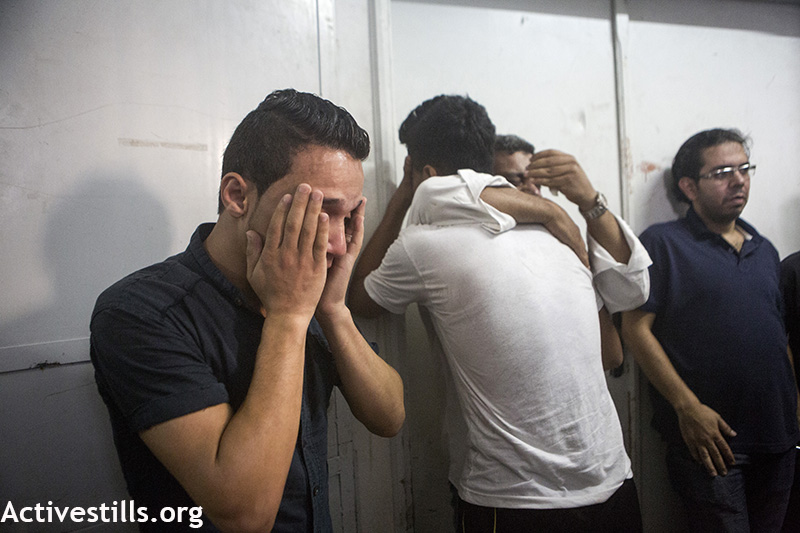 I could not maintain my daily photo post. I have been overwhelmed by the events unfolding. Internet has been also irregular in the place I am staying and at night this is dangerous to move. Exhaustion, despair and rage made it more and more difficult to focus. Since I last wrote on this blog. Everyday seems worse that the previous day. There was an attack on a school today, and then on a market of Shujaiyeh .  A second strike on the market targeted the people who rushed to help the injured from the first strike. A journalist was killed, and 16 persons.
Hospitals were scenes of chaos, horror, and despair. It seems that in a room you have such a level of suffering that make it difficult to breathe.
I know these images are difficult to watch. I must tell that I am not showing the most difficult ones. I have seen today a whole family who had burned alive after a shell set their home on fire.  They were hiding below the stairs, and could not get out.
Only today more than 100 Palestinians were killed.
We need not only that these attacks stop immediately but we need accountability. The idea that 300 children have been killed with total impunity is just unbearable.
This entry was posted in General and tagged air strike, anger, buffer zone, destruction of infrastructure, displacement, power plant, sheja'iya, targetting journalists, un school attacked, violence against children, water. Bookmark the permalink.